(a)  The Methodist Church in Scott Street is hosting a Platinum Pudding Party this coming Saturday afternoon (29th May) to which all are invited.

(b)  Friends/Quakers:  Stella also gave a warm invitation to an afternoon of Dances for Universal Peace, being held in the Subud Centre from 12.30 – 4 on Saturday 25th June.  A flyer has also been distributed.  Stella also thanked those who had responded to her
request for knitted dementia-friedly hippos – she had been able to send 20 from Perth to the organisers in Fife.

(c)  St Ninian’s Cathedral hosted a Big Brekkie for Christian Aid and were delighted to report that it raised over £1000.

(d)  The Congregational Church is slowly getting back to ‘normal’ with organsations starting up again.  Warm appreciation was expressed for  Rev. Gordon Campbell’s  contribution to providing worship for all.

(e)  Scone Church will be holding a Fair, out of doors if weather permits, on 20th August – more details will be sent nearer the time.

(f)  on behalf of the North Church, thanks were expressed to those who came on the prayer walk round different churches during Holy Week. There was a good representation from a number of churches, and the walk was enjoyed and appreciated by those who took part.

(g)  The Salvation Army have welcomed a new Community Coordinator, who started three weeks ago.  The Furniture Project is now established in the Barclay’s buiding in the Glasgow Road, and a van driver recruited.  On Saturday 11th June, the Salvation Army is hosting a Strawberry Afternoon tea.

Advance notice was given that the Govan Songsters will be visiting Perth in September – a poster will follow.

(h)  St Matthew’s will be having various stalls, food  and games to coincide with the Vintage Car Rally being held in Tay Street on Saturday 4th June as part of the Platinum Jubilee Celebrations. On Sunday 5th June at 11a.m. there will be an outdoor Songs of Praise in Tay Street.

The church sanctuary will be hosting a number of art exhibitions over 9 weeks in the summer.

(i)  The Union of Catholic Mothers at St John’s Catholic Church will be hosting their annual barbecue on Tuesday 21st June, and invitations are being sent round the other churches.

PACT welcomed Rev Paul Wilson from Work Place Chaplaincy  as its guest speaker at the 2022 AGM.

Marianne  Anker-Petersen  has retired, and her husband Robin will very soon retire,  from their ministry at the Bield at Blackruthven, and warm wishes are sent to them for their retirement.  We look forward to welcoming Rev Pauline Steenbergen as the new Chaplain at the Bield.

We send good wishes also to Rev Nik Wooler who will be leaving Perth Methodist Church in September.

Sincere and grateful thanks were expressed to Very Rev. Graham Taylor, who has been our  Convener since 2018 and is now stepping down from that role.   Our new Convenor is Jenny Dawson from St John’s Catholic Church, with Andrew Howe from the Salvation Army  as Vice-Convenor.  Marjorie Clark remains as Secretary and Lorna Ferguson
as Treasurer.

Thanks were given to Our Lady of Lourdes Church who hosted the AGM in their new hall, and provided hospitality.

St John’s Episcopal Church, Princes Street, Perth, are hosting an evening of Taizé prayer, reflection and music, on Tuesday 31st May, at 7pm. All welcome.

You are warmly invited to join us for an afternoon of Dances of Universal Peace. These Dances can bring peace, joy and harmony into our lives, enabling us to connect more deeply with ourselves and each other. Inspired by sacred phrases taken from spiritual traditions around the world, the Dances are easy to learn – all that is needed is a willingness to take part.

The Spring edition of Churches Action for the Homeless is available here:

Perth Street Pastors would like to invite you to their latest Commissioning Service which is taking place in St Matthews Church, Tay Street Perth at 7pm, on Thursday 5th May.

It would be a great encouragement to the people being Commissioned as Street and School Pastors and also an opportunity to learn more about how Street Pastoring has changed since Covid arrived, we now have daytime and early evening patrols which would suit people who have considered Street Pastoring before but were unable to commit to the 9.30pm  – 3.30am patrols, we are also looking for Prayer Pastors to join patrols from the comfort of their own home if that is something that suits.

Perth North City Centre group are organising a prayer walk through the City on the Wednesday of Holy Week, 13th, at 1.30pm. We will be meeting in the North Church garden and we expect the walk to take around an hour taking in Horsecross, St Matthew’s, St John’s, St Leonard’s, the Methodist church and finishing in Old St Paul’s.

We are also setting up a “prayer tree” in the garden with blue/ yellow ribbons so that people can leave a prayer message tied to a tree or bush. This will run from Palm Sunday till Easter Monday if anyone want to participate.

"But Jesus Himself would often slip away to the wilderness and pray." Luke 5:16 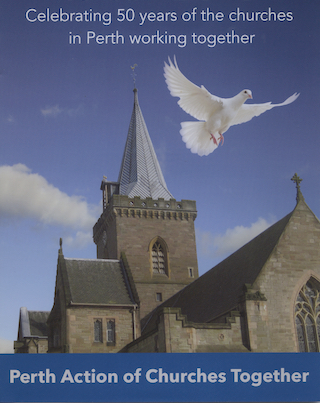